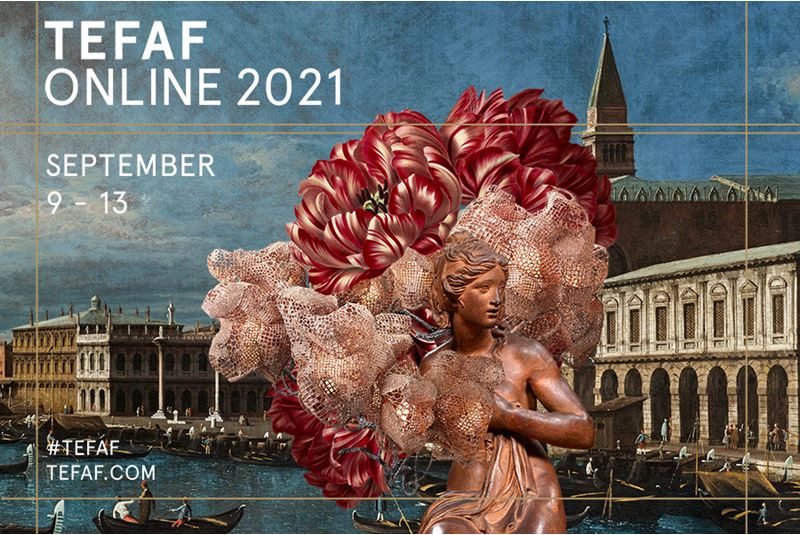 It is with great pleasure that we welcome you to our online showroom for the 2021 edition of the TEFAF ONLINE.

Of all the visual arts, tapestry was considered the most important art form during the 15th and 16th century. Therefore, tapestries were listed first in royal inventories, before the paintings and the sculptures. For kings, princes and the great of the earth tapestries were the means par excellence to parade their power, their wealth and above all their great culture. No festivities, no ceremonies, no top-level meetings were staged without tapestries to dazzle their peers and create a sumptuous and refined space.

Since 1889 and for five generations now, our family - consisting of tapestry weavers, restorers, tapestry experts and dealers – carries on the tradition of the Flemish tapestry of which it is the heir today.

My ambition and that of my son Pierre is to preserve and develop this unique expertise and to continue to promote this art which brings warmth and well-being to our interiors, adding an incomparable accent of magnificence.

The three tapestries we have chosen illustrate marvellously the splendour of this art.

The Prince of Envy tapestry, woven around 1520-1525, represents the theme of Vices and Virtues, a major theme in medieval culture. Tapestries served as monumental, illustrated books or comic strips with their speech balloons at the top, as is also the case with this tapestry. They sought to educate, charm, and impress the common people and the powerful who governed them, as well as their entourage. With the coats of arms of François de la Viefville, Lord of Frestoy, Conteville, Westrehem, Flers and Flammermont, and Anne de Neufville, Lady of Blagny, Villers and Marconcelles, this tapestry, probably woven on the occasion of their marriage, aspires to reveal the path to peace and happiness to the bride and groom. In a banquet scene, presided over by a Prince seated under his canopy, richly arrayed troops on horseback advance and frighten off numerous ladies personifying Prudence, Justice, Strength and Temperance, the four Cardinal Virtues, as well as Faith and Hope, in a spectacular and colourful tumult. We particularly appreciate the expressions and postures of the many characters, which illustrate the variety of human feelings and passions. The scene is situated in an Enclosed Garden dotted with flowers and plants, as evocation of the Earthly Paradise which is clearly endangered in this setting.

Our mid-sixteenth century Large Leaf Verdure tapestry also represents the Earthly Paradise. An interlacing of large, stylized acanthus leaves hosts numerous animals such as birds and insects. The leaping goat depicted in the center of the tapestry is undoubtedly fleeing from danger. The Earthly Paradise is a recurring theme in 16th century Verdures, showing idyllic and luxuriant green compositions like this one, but where danger and drama are often underlying. This Aristoloche tapestry (another name for Large Leaf Verdure) puts all the iconographic elements one can dream of on display: a fine border, an architrave supported by two marble columns overgrown with vegetation and a large vase with leaves and flowers in front of a balcony in the foreground; all this in exceptional condition with amazingly fresh colours. The tapestry even carries a mark identified as the mark form a workshop in the city of Oudenaarde, which is very rare. We are amazed by the extent to which this work transcends time through its abstract, surreal, and eminently modern aspect.

The contrast with our tapestry after Sonia Delaunay is vibrant and enriching. The colours are of great intensity and delicacy at the same time. The textile material, with its natural vibration, is reminiscent of old tapestries. In this tapestry we admire the great colour contrasts, also found in the art of stained glass - a monumental art that is very close to that of tapestries - here accompanied by the warmth and intimacy of a fabric that is very accessible, very convivial. With its directness mixed with subtlety, we believe that it integrates strongly and elegantly in any type of interior, and that is what characterizes a work of art of the highest level. 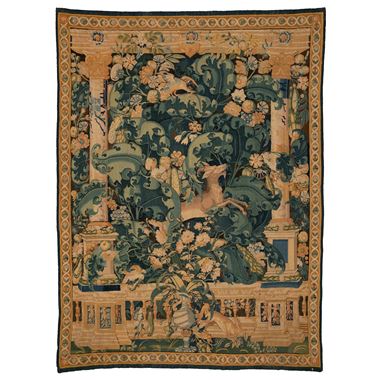