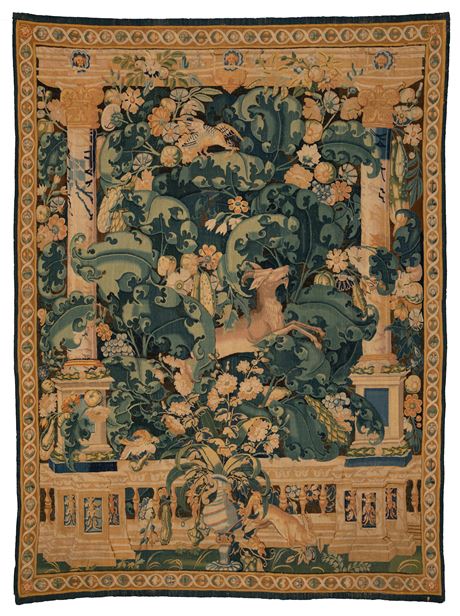 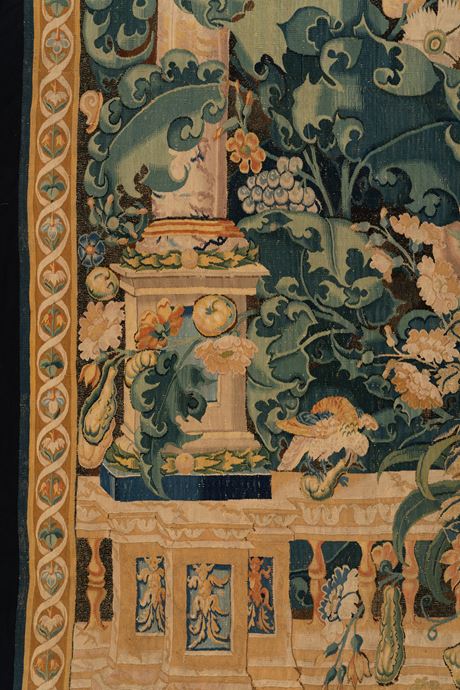 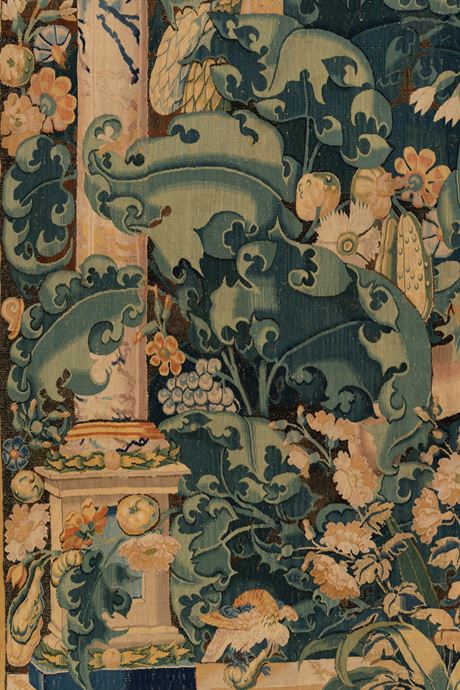 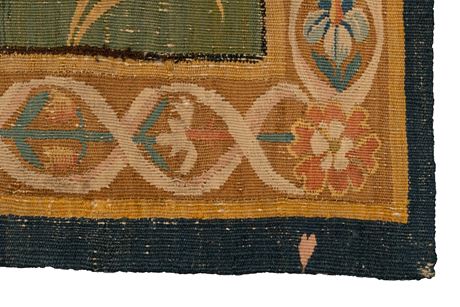 A pergola consisting of two pillars and a balustrade is entirely filled with large indented green leaves. Several animals appear from behind this vegetation: a billy goat jumping up in the middle, a rooster catching a worm in the top left corner; a parrot eating some fruit on the left side of the balustrade and a running hare on the foreground. Are these animals merely ornamental, or do they carry a symbolic meaning? Billy goats and hares could possibly refer to sexuality and fertility… but that question remains unresolved.

The background of leaves is generally called “feuilles de choux” (cabbage leaves), but there are good reasons to believe that they rather represent acanthus leaves, frequently occurring - together with helmet crests - on heraldic tapestries in the 16th century. The common name for these tapestries was “feuillage” in French, “fogliami” in Italian. The white flower appearing from the vase in the middle is probably the crowned goose flower (Glebionis coronaria syn. Chrysanthemum coronarium), a type of chrysanthemum, that reached Flanders from southern Europe in the middle of the 16th century.

The dating of tapestries like these is only circumstantial. The marbled pillars with pseudo-Corinthian capitals, as well as the little grotesque ornaments on the front of the balustrade point to the Renaissance. The exterior border with twisted ribbons is common in Brussels tapestry around 1550.
The origin of the design remains unidentified, but it corresponds to the growing interest in botanical themes, illustrated in botanical atlases such as the Cruydenboeck by Rembert Dodoens (1517-1584), published from 1554 on.

These highly ornamental tapestries were produced in several centres of the Southern Netherlands, but there are good reasons to believe that this piece has been woven in Oudenaarde. On the lower selvedge, at the right, a small sign in the shape of a heart is visible. This mark has been found on several Oudenaarde tapestries, dated around 1575 or later: a Life of Alexander (Oudenaarde, City Hall) and a Story of Troy: The Trojan Horse (Luxemburg, Castle of Vianden). It may refer to a hitherto unidentified manufacture.

The combination of the architectural frame and the horizontal balustrade on this tapestry is quite unique. On many Verdure tapestries of this kind only a concave balustrade is depicted, without side pillars or upper front.

This type of weavings must have been produced in large quantities. In some inventories of noble families up to fifteen or even twenty panels with this design were listed. They used them as “winter gardens” in their cold castles. But once worn out, they would have been destroyed and thrown away. A rare example of a set of four similar Verdures is now still located in the Kunstgewerbemuseum in Berlin.